Contemporary Poetry in the Public Spaces

‘Contemporary Poetry in the Public Spaces’ took place at Lancaster University on 22nd May 2013. This interdisciplinary workshop brought together researchers based in the UK and Canada for a day of presentations and debates on contemporary poetry in the public space. Contributions focused on poetry and poetic practices from the Americas and Europe, through an interdisciplinary and comparative framework and from a transnational and transcultural perspective.

The workshop introduced the interdisciplinary research project ‘Contemporary Poetry in the Public Space: Intervention, Transfer and Performativity’, funded by the Spanish Ministry for Science and Innovation and based at the University of Santiago de Compostela. The international group of researchers associated with the project explored the ways in which poetry occupies, presents or actualizes itself, and intervenes in spaces shared by a community of citizens; whereby citizenship is interpreted as transnational. Poetry functions here as a conduit for, or act of translation between, different elements of public life. Research of the project’s members’ focuses on the ways in which poetry publicly interacts with and constitutes subjectivities, (trans) mediality, and space. It is hoped that this workshop will have initiated a dialogue between project members and colleagues from other UK institutions.

The Keynote Lecture was given by Daniel Chamberlain, Queens University, Canada. An extract from his paper, Radical Meeting Places: Poetry and the Public Domain, can be seen on YouTube: 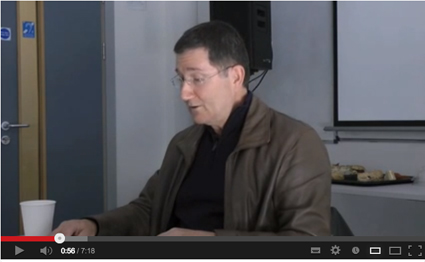 Chamberlain’s paper argued that “Whether oral or written, poetry in public places often awakens acts or mimetic gestures that problematize orderly configurations in social and conceptual space. Over the past century, balladeers and oral poets have undermined these configurations, both legitimate and illegitimate, through songs of protest in South American, through Zapatista “hymns” in southern Mexico, through narcocorridos in the Mexican-American borderlands, and through poetic calls for equality in the Anglophone Caribbean. Reaction to these poetic “offenses” has not stopped short of sentencing poets to incarceration or death, thus highlighting the role of the body not only as a field of aesthetic reception but also as a formidable point of departure for poetry in spatial practice. Recent studies have acknowledged this role but have tended to present the body as a discrete entity rather than one deeply intertwined with the world. Drawing from the phenomenology of Maurice Merleau-Ponty and from Paul Ricoeur’s phenomenological hermeneutics, this paper will examine the interaction of body, poetry, and place in a selection of Hispanic and Caribbean works. It aims to move the exploration of this interaction to a radical level that is rhythmically opened by poetry and from which readers’ and listeners’ actions in the world are generated.” The whole of Chamberlain’s presentation will soon be available in our iBase digital database, when that becomes part of the CTWR site.

The published works of Andi Nachon (Buenos Aires, 1970) comprise more than half a dozen single-authored collections of poetry, inclusion in several recent anthologies, and her own anthology of Argentine women poets. Her name appears in articles and works on recent poetry from Argentina, as in Diana Bellessi’s La pequeña voz del mundo. She also gives frequent readings on the Buenos Aires poetry circuit. Her work, though, lacks a sustained critical study. This is surprising. Nachon’s poetry occupies, in form and technique, a space between the dominant trends of 80s and 90s poetry – broadly speaking, the neobarroco and objectivismo – whilst her themes take in contemporary pop culture, political memory and resistance, and what might be termed the psychogeography of the city, set against the changes in the nature of public space that took place in turn of the century Argentina. Ambiguity – of subject or narrative position; of syntax; of geographical or physical position; and of gender – characterizes much of her work. For these and other reasons, a detailed reading of a selection of poems from throughout her career is somewhat overdue. This paper sets out to examine a number of aspects of her poetry: the context from which her earliest work emerges; its development of novel forms of address, in relation to comparable near-contemporary poets; explorations of public space, including a form of psychogeography, in both her early collections and her volume Taiga (2000); the subtle political engagements found in her poetry, including a later collection Plaza real (2004); before looking at her most recent poetry and its interaction with non-poetic forms. Questions of the lyric and what has been called by Baltrusch and Lourido (2012) and Casas (2012), amongst others, “non-lyric poetry”, are central to these analyses.
*”You and I are here.”

Once an incarnation of national populism’s prosperous utopia, the industrial zone of Riachuelo in the outer port area of Buenos Aires became a landscape corroded by the effects of idle time. This desolated image conveys the social, economic and political devaluation provoked by a neoliberal economy forcefully imposed during Menem’s administration at the beginning of the 1990s. Daniel García Helder’s “Tomas para un documental” (1997) makes visible the remnants of the fantasy of the national populism that have formed a complex temporal geology in both social space and language. However, rather than a passive eye ‘registering’ the consequences of a defeated project, the poems present an inquisitive body standing in a temporal interstice where ruins fuse into the image of a whole catastrophe. In this way, ‘Tomas’ deploys an anti-teleological temporality that subverts the symbolic completeness of history and its discourse of progress.

“To the city of Babylon now arrives
the minor music’s distress.”
(Enrique Lihn)
This presentation explores the soundscape of various public spaces in the city centre of Santiago de Chile which appear in Enrique Lihn’s poetry collection Paseo Ahumada, written in 1983 during Pinochet’s dictatorship. Lihn approaches social space as an exposed field for contrasting realities and also as an intense metaphor of the Chilean neoliberal project of the early 80s. Field recordings collected during various journeys to Chile will be used as a framework for the presentation and a brief discussion of Lihn’s later work. The aim of these recordings was to capture the sonic environment of the city centre, as well as those everyday voices which are audible in public space and which were so central to Lihn’s poetic work. Some of the public places featured and the voices that intervene sonically into public space include coffee shops with waitresses serving in miniskirts and heels to office workers, a public demonstration of l’Óreal employees, a chinchinero (one-man band) drumming in a pedestrian alley, a blind singer and an enthusiastic evangelist preacher in a public square.

Splitting tongues: The deterritorialisation of language in the multilingual poetry of Claude Vigée and André Weckmann, Delphine Grass, Lancaster University

Situated on the border between France and Germany, Alsace is a French region which has changed nationality repeatedly over the course of the nineteenth and twentieth century. The question of the cultural identity of Alsace-Lorraine, informed by the fact that the Alsatian dialect, or Elsässerditsch, is a form Allemmanic German, has been at the centre of much dispute surrounding the legitimate nationality of its people in the nineteenth and twentieth century. This paper will discuss the literary implications of the trilingualism of two Alsatian poets, Claude Vigée and André Weckmann, who, instead of choosing a language of legitimate “reterritorialisation”, wrote poetry in French, German and Alsatian. Both poets wrote and translated from these languages in spite of the political implications of this gesture in the aftermath of the Second World War. The multilingual poetics of their works signified a departure from nationalist territorial norms, the opening up of a public space at the crossing of languages. How was the geopolitical situation of Alsace poeticised and integrated in their works? Which poetic technique developed multilingualism into a poetic in its own right which informed not only linguistic choice but transpired in the stylistic forms of the poems? This paper will discuss how, in Vigée and Weckmann’s poems, the space of the poem on the page is used to mediate the relationship between geographical space and language in the texts. It will investigate how the poetry of Vigée and Weckmann is haunted by the potency of their linguistic choice and the desire to turn the liminality of the border into a public space of enunciation in its own right.

Panel 3: The Visible and the Invisible in Public Space

The Mapuche are the most numerous, most vocal, and most politically involved indigenous people in modern Chile. Their ongoing struggles against (cultural, economic, military, political and social) oppression have led to increasing national and international visibility. Mapuche artists and intellectuals have played an important role in these struggles. This paper explores the implications of the growing presence of Mapuche poetry in Chile’s urban centres, particularly the capital city Santiago. It examines the multiple ways in which Mapuche poets have appropriated public spaces, which previously excluded them, and the narratives they are publicising from these spaces. It probes the dynamic relationship between poetry and the Mapuche political movement – underscoring the diversity of both – and looks at how the poetry aims to rethink indigeneity’s place in the urban landscape.

This is an exploratory paper on the character of poetry on the London Underground. ‘The Underground’ has traditionally served as a metonym of the ‘Underworld’: the dark, hidden underbelly of urban life with connotations of ‘film noir’ and organised crime. Alternatively, as far as freedom of expression is concerned, it has been synonymous with sedition and secret resistance to forms of political or artistic hegemony. The metropolitan underground network on the other hand, for example in London, Paris or Berlin, has become an object of nostalgia, a romanticised interest in period charm, a place of shelter in times of war, a skeletal structure which constitutes the core of the city’s inner meaning. It is therefore intriguing to explore the fashion of publishing poetry on the walls of the London tube and those of other major European cities. What stimulated this initiative? What was its purpose? What are the main themes of the poems selected? How does their language position their readers? What social conclusions can be drawn from this improbable trend? Contextual analysis and close reading of selected verses offers some provisional answers to these questions.

Absences and Emergences: The ‘other’ Europe of the Brussels Poetry Collective
Cornelia Gräbner, Lancaster University

This paper focuses on the work of the Brussels Poetry Collective. The collective consists of poets of different nationalities who write in different languages, translate each other, and are committed to discover and articulate poetry that is already and invisibly part of the city of Brussels; one of their projects is The European Constitution in Verse, an alternative to the document produced by the European Union. The Collective’s work challenges visions of Europe articulated by corporate and neoliberal Europe, as well as literary theory’s obsession with the figure of ‘the Poet’, an obsession which produces academic illiteracy when it comes to the appreciation of collective and egalitarian efforts which do not subsume the individual into a collective.
By developing the poetics of absences and emergences (see Boaventura de Sousa Santos’ sociology of absences and emergences) in a dialogue with the work of the Brussels Poetry Collective, this paper seeks to contribute to building literacy in what the Europe of coloniality and of corporate globalisation has rendered absent in its capital Brussels, and in what is emergent when Europe rediscovers itself in a public space that invites constructive egalitarian interactions with Europe’s many ‘Others.’