I wake at about 11.00 o’clock after a brief rest. The hotel has been taken over by Soran University and Muli is now resident here. It’s mostly empty and pretty basic. After some running repairs to the plumbing, we drink more tea, test her new wi-fi setup, then begin to go through our plans.

The idea is to run a pilot project between now and March 2014, carrying out interviews with fifteen women between the ages of 50 and 70, to record the stories of their lives. In this region up to 60% of the population has been displaced by war and persecutions. We’re interested in what the women were doing and enduring as the men were fighting. Those stories will be recorded on audio equipment, translated from Kurdish into English, then shaped into narratives that the women will themselves audit for authenticity.

There are some complicated methodological and ethical issues to negotiate. We envisage a form of creative ethnography relating to the experience of conflict and the movement of populations within the region. The tensions between traditional culture, war, liberation, newly exploited wealth, women’s rights and agendas of nation building will underpin those narratives. We expect the pilot scheme to result in a website, a publication and a performance, whilst also building skills and capacity for further research that may lead to a wider project.

When we take on the rain to meet a colleague of Muli’s for lunch, the roads are streaming with muddy water and the traffic has clotted into a slowly moving mass. We eat pickled cucumbers and aubergines fried with tomatoes whilst discussing what to expect from the English department tomorrow when I go to work with Muli for the first time. There seems to be no such thing as a table knife in Kurdistan, so we eat with fork, spoon and fingers. 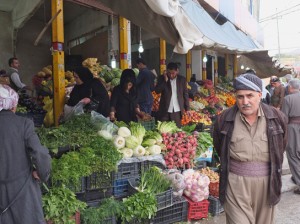 It’s hard to get a sense of Soran yet, except in relation to the ring of mountains that appear then disappear into mist. The sky is constantly changing, wild with cloud and light. There are giant sculptures of a ram and an eagle in Peshmerga Square and the streets run out from there, packed with open-fronted shops selling everything from local cheese, yoghurt, lentils, rice, dried cherries and apricots, to shoes, leather jackets, textiles, plumbing equipment, hardware, shovels, padlocks, samovars and heavy duty electrical cable. There is a sense of energy, commerce and enterprise. There are very few women in the streets today and none serving in the hotel and cafes. I remember how no one offered to help me carry my bags when I arrived at the hotel. In the street Muli and I are met with direct, often inquisitive stares. None of that is hostile, but there is a proud and masculine culture here, at least on the surface.

When we return to the hotel, it begins to darken outside. Men are still moving about in white wellingtons on the building that is going up under timber scaffolding opposite the hotel. Traffic moves in continuous threads, joining and dispersing under mountains hidden in wads of mist that fold them on all sides. The cars sound their horns almost neurotically: the default signaling system. Brake lights blush through rain and net curtains. A scent of raw fuel and burning diesel enters to remind me what ‘s driving things around here.