The first leg of my trip to Soran begins in Manchester, the city I grew up in. The plane takes me to Istanbul where East and West seem to meet and compete before bringing me to the Kurdish city of Erbil at 4.30am. It seems strange to move from memories of my past to such a fabled land and peoples: from the cradle of industry to the cradle of human culture. 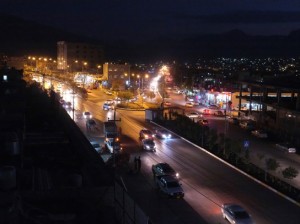 It’s raining in Kurdistan. Lights flare on wet tarmac and at night one airport looks much like another. I’m picked up by two students acting as university drivers and we head out on the two-hour trip to Soran in a pickup truck that bounces over uneven roads and sleeping policemen.

Kurdistan is a now a semi-autonomous region within Iraq. There are also very substantial Kurdish populations in Iran, Turkey and Syria. Since its inception after the Allied no-fly zone in 1991, political, territorial and economic tensions have developed with Baghdad. Those political facts seem remote now. The pickup is stuffy and I open the window for air. One lad dozes against my luggage and the other rams the gear stick and calls back to him over the engine. Rain spatters into the car and it’s a pretty wild ride by any standards. If it goes well we should reach Soran as dawn breaks.

The suburbs of Erbil sprawl for kilometers. The road is being widened and there are signs of new construction everywhere: half-completed buildings and heaps of aggregate lit briefly from the dark. Avenues of grandiose streetlamps give way to sparser, less well-lit streets. The driver stops at regular checkpoints where armed police stare into the car through rain. They look unimpressed. Our headlamps catch a pack of stray dogs slinking from the dark. There are building sites at frequent intervals, heavy earth-moving machinery, fleets of oil tankers parked in lorry parks and laybys.

The car fills with the faint but sulphurous tang of burning fuel. Oil production is increasing here and drives the economic boom that is pushing the agenda for autonomy that is so alarming to Kurdistan’s neighbors. Many of the closed-up shops and truck stops have goods left outside all night without fear of theft – a situation imposed by Islamic faith rather than a well-policed state. The radio plays Kurdish songs that have hypnotic rhythms and melismatic vocal lines reminiscent of Irish folk music.

The road begins to climb and the suburban borderlands thin out. The tarmac ribbon winds up onto what seems like an area of moorland. Then trees appear beside the road in the gloom. By five-thirty the sky is lightening under a band of black cloud and we’re driving through a series of deep passes and gorges, each hillside carrying a spattering of trees. We pass a huge waterfall gushing beside the road, then thread our way through a flock of sheep driven by a shepherd in traditional Kurdish dress, shouldering his stick. Huge blocks of stone have crashed from hillsides onto the valley bottom and the road swerves past them, streaming with rain. It’s an extraordinary landscape at once awe-inspiring, remorseless and beautiful. Bare rock, pads of autumn grass, sparse trees. This land has been fought over, brutally subjugated, then redeemed though peshmerga blood and Allied airpower.

The hairpin bends gradually straighten and we enter Soran in the early hours just as the city begins to stir. It’s built on a plateau with mountains on all sides. There are no really high buildings here and there’s a sense of crowded space filled with shops and flat-topped houses. As we arrive at the Soran Sky Hotel the mountains are just waking from mist and Muli is there to greet me in a corridor of heavy mahogany doors.

I’m too excited to sleep just yet and we spend an hour drinking chai and catching up before I take a shower. Even the duvet cover carries the faint tang of petroleum fuel and I can hear the city speeding up outside: traffic swishing, traders callings to each other, a new day breaking as I try to sleep.