The call to prayer wakes me at 5.00am, so I catch up with a few emails before trying to sleep again since the traffic hasn’t yet started to move. When the day comes it’s a brilliant one, lit by mild autumn sun.

I watch a group of children play outside as I wait for breakfast, the boys in miniature leather jackets, the girls in floral frocks and pigtails. A group of elderly peshmerga gathers to talk just by the window. They receive a state pension, which explains why so many of them seem to be at leisure in the city. On the wide screen TV there are a sequential musicals playing: all sentimental propaganda for the new Kurdistan, featuring eager children and heroic peshmerga – both men and women. The show feature electric guitars and drums as well as fiddles and ouds. None of the women in the musicals are veiled.

I’m joined by a German environmentalist, Günter, who’s here to raise awareness of environmental degradation and perhaps develop plans for a national park. The amount of trash scattered about the city is depressing, mainly plastic waste and cardboard that could be re-cycled. Today he’s addressing Mullahs. Yesterday it was mayors. He tells me he’s here because a local mayor who was tortured by the Iraqi’s has to have medical treatment in Austria and so the link was formed. He shrugs wryly. Even misfortune can lead to something good. 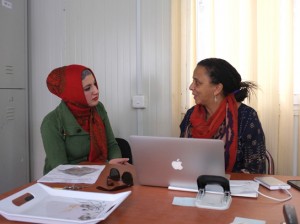 We spend the morning working with our researchers, planning our first interview for the afternoon. Then we’re called away to the University finance office and waste several hours getting my expenses repaid. It’s a mysterious bureaucracy. Each task has several officials to manage it in offices where the secretaries don’t seem to do very much. By the time the money comes through we’ve missed the opportunity to interview our subject, so we defer until tomorrow, which is a religious holiday. At least she’ll have broken her fast by then.

Back at the hotel we work in the café to draw up the initial documentation for a new Writing Research Centre, which will house our project. After about an hour the power fails, so we admit defeat and get ready to join some colleagues in a local fish restaurant for dinner. Two huge carp from the tank outside have been filleted and split down the middle before grilled and served on steel platters. There’s hardly room for anything else on the table. I think over the day as we talk. Things can move very slowly here, as Muli has warned me. So we need to be philosophical, maybe resign ourselves to the fact that we can’t achieve everything we’d hoped for before I leave on Saturday.