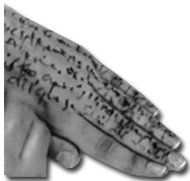 The Centre’s new series of Trans-Scriptions began with an event held in County South Lecture Theatre, Lancaster University, on 1st May 2008. “Migration, Memory & Mood in ‘Multicultural’ Britain” brought together a contemporary writer, a sociologist and a visual artist and filmmaker to discuss the themes of migration, memory, and mood in ‘multicultural’ Britain. Dr Anne-Marie Fortier opened the programme with a paper on recent constructions of multicultural Britain. This was followed by a talk and reading given by the novelist Fadia Faqir and by Zineb Sedira talking about her photography and filmmaking. The event was well-attended and there was a lively discussion of the issues raised.

Featured in the event, Mother Tongue is a video triptych, recalling the oral tradition of storytelling, passed along the matrilineal chain as a means of preserving cultural identity from one generation to the next.  The piece explores translation within cultural identity, portraying three generations of women (a mother, a daughter and a grandmother). The participants each speak in their ‘mother tongue’ of Arabic, French or English. Intimate and moving, the diasporic exchange of these languages attempts to track a broken narrative between the artist’s daughter and mother who do not understand their respective spoken languages of English and Arabic.