Let’s sit quietly for a moment before we continue with our journey. Let’s do some reading and some talking. Someone reached out to you and it’s time that you give them some consideration. The Zapatistas, yes. They are mostly indigenous people from Chiapas. With ‘Zapatistas’ we mean the Zapatista Army for National Liberation (EZLN), an armed guerrilla group; and their civilian support bases who live in the Autonomous Municipalities in Resistance – Support Bases of the EZLN (MAREZ).

They speak to us through many different voices: the Clandestine Indigenous Revolutionary Committee – General Command (CCRI-CG) address us through communiqués and through the voice of the Subcomandante Insurgente Marcos, and the civilian support bases address us through the Good Government Councils (JBG). They write letters, stories, declarations, poems, and speeches. I won’t speak for them; their word is present in the links, and in the links that those links lead you to. 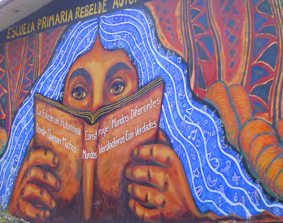 And the ‘poetic word’? In the context of an armed group and in the context of the nitty-gritty everyday effort of building a ‘world where many worlds fit’, as the Zapatistas say?

According to the ‘Story of the Words’, the first gods in one of their games found two smooth flat stones that had been dragged around the world so much that they had become smooth like mirrors. They placed the stones opposite each other and started throwing words into one, which bounced back into the other, and every time the amount of words doubled. The first three words, the ones that gave birth to all the other words, are democracy, freedom, and justice.

Imagine a clandestine poetic word. In the early 1980s, a group of Maoist guerrillerxs from the city come to the mountains of Chiapas. They try to convince the indigenous communities of the need for armed struggle. The response: ‘Your word is too hard.’ The guerrillerxs stop speaking and start listening. The EZLN becomes a mostly indigenous group. Many years later, Marcos explains this encounter in hindsight, framed in letters and stories of the present, through the stories of Old Antonio. One of them is The Story of the Questions (http://flag.blackened.net/revolt/mexico/ezln/marcos_sacrifice_dec94.html)

Imagine an insurgent poetic word, one that comes with an armed uprising, with the reclaiming of stolen land, with the burning of government registers: ¡Ya basta! Enough is enough!. On 1st January 1994, on the day the North American Free Trade Agreement comes into force, the EZLN rises up and take six municipalities in Chiapas. Why do they rise up? Read for yourself: Chiapas: The South-East in Two Winds (http://lanic.utexas.edu/project/Zapatistas/chiapas.html)

On 1st January 1994 the EZLN declare their resistance to neoliberal policies and especially, to the privatization of communal lands: First Declaration of the Lacandon Jungle: We’re the product of 500 years of struggle (http://flag.blackened.net/revolt/mexico/ezln/ezlnwa.html)

Imagine a rebellious poetic word. The government deploys the army in Chiapas. After two weeks of fighting and after a massive anti-war mobilization in the Mexican cities, the government offers a truce and a pardon. The EZLN replies: Who should ask for pardon and who can grant it? (scroll up to page 38)

Imagine a poetic word of peace. In January 1994 the Mexican government offers the EZLN peace negotiations. The insurgent poetic word meets the word of the political class. The politicians are trying to negotiate, and the EZLN is trying to dialogue. In 1996, they agree on the San Andrés Peace Accords. But the law approved by congress leaves out important points, like indigenous control over natural resources. The Zapatistas unilaterally implement the Accords: Fourth Declaration of the Lacandon Jungle: The Flower of the Word will not Die (http://flag.blackened.net/revolt/mexico/ezln/jung4.html)

Imagine a poetic word of learning. Marcos is not only a commander, a spokesman, and a writer; he is also a character in his stories, and he is a student. Old Don Antonio – who appears in the ‘Story of the Questions’ –  is one of his teachers. Another one is the beetle Don Durito de la Lacandona, a contemporary knight-errand in the tradition of Don Quixote. He makes Marcos his squire and makes him look at the world from the perspective of those who are easily trampled by the boots of the guerrillerxs. He draws Marcos into his irreverent, quixotic analyses of neoliberalism, spattered with references to literature. Another Cloud, Another Bottle, and Another Letter from Durito

Imagine a poetic word of effort. The Zapatistas build an autonomous government structure, healthcare, an education system, a justice system. They resist the presence of the army, and paramilitary attacks. They maintain global relationships of solidarity. The poetic word becomes part of the effort that builds alternative structures. Chiapas: The Thirteenth Stele (http://www.edinchiapas.org.uk/node/35)

Imagine a poetic word that holds many voices. In 2005 the EZLN issue the Sixth Declaration of the Lacandon Jungle; an invitation to organisations and individuals in Mexico and abroad to share their project of resistance, and to share experiences, struggles, and commitments. They start ‘the other campaign’ that Alejandro Reyes explained in his audio on ‘2006.‘ Sixth Declaration: This is our simple word which seeks to touch the heart of simple people like ourselves (http://enlacezapatista.ezln.org.mx/2013/02/09/them-and-us-vi-the-gaze/)

Imagine a poetic word that is silent. In 2012, on the day that the last known cycle of the Mayan calendar ends, about 50.000 Zapatista support bases march in silence through several towns in Chiapas: Silent March 21st December 2012 (http://www.youtube.com/watch?v=5K_z_ceSlwE)

They didn’t speak, but they sent a communiqué: Did you listen? (http://enlacezapatista.ezln.org.mx/2013/01/02/communique-of-the-clandestine-indigenous-revolutionary-committee-general-command-of-the-zapatista-national-liberation-army-mexico/)

Imagine a poetic word that is shared. Between January and March of 2013, a new series of communiqués is issued, directed at those who have committed to walk with the Zapatistas: IV: Them and Us: The Gaze: One may gaze to impose or gaze to listen (http://enlacezapatista.ezln.org.mx/2013/02/09/them-and-us-vi-the-gaze/)

Imagine a poetic word that asks you to respond otherwise. ‘What matters is our eldest elders who received the word and the silence as a gift in order to know themselves and to touch the heart of the other. Speaking and listening is how true men and women learn to walk. It is the word that gives form to that walk that goes on inside us. It is the word that is the bridge to cross to the other side. Silence is what Power offers our pain in order to make us small. When we are silenced, we remain very much alone. Speaking, we heal the pain. Speaking, we accompany one another. Power uses the word to impose his empire of silence. We use the word to renew ourselves. Power uses silence to hide his crimes. We use silence to listen to one another, to touch one another, to know one another.’

Do you recognize something of yourself in that sense that those in power are dispossessing you of what you can’t give up without losing yourself? Your city, your river, your forest, your footpaths, your knowledge, your work, your sexual desire, your way to love, your word, your lifetime, your future,…?

Do you taste the staleness of what those in Power offer you as recompense? Status, recognition, success, More, a nice place on the SafeSide, consumer goods, the type of intimacy that The Invisible Committee has called ‘autism-for-two’, …?

Do you find yourself successfully communicating in a language that has nothing of you in it?

Do you wonder how it is that in those ‘real conversations’ you only ever hear different versions of the same, pre-fabricated story? Do you wonder why we call this imposition ‘truth’?

Do you want to hold on to your inner truth, the truth that binds you to this world and to yourself?

‘Can those who have answered Yes to the above questions continue doing nothing without something inside them shattering?’ (S.I. Marcos, ‘The Story of the Questions’)