Our next stop is San Cristóbal de Las Casas in Chiapas, in the South of the country. We take an overnight bus from Mexico City and then a taxi into this beautiful colonial city with its pedestrianized centre and the raised sidewalks.*

I’ll leave you for a moment in front of one of those lovely shops. No, not to browse. Turn your back towards the street, close your eyes, count to ten.

Open your eyes and look straight across the road at the café on the other side.

What do you see? A stream of people wanders by, many of them tourists. Street vendors – many of them children, all of them indigenous – offer their bracelets, belts, rebozos (shawls), separadores de libros (bookmarks). Yes, and what else do you see? Nothing out of the ordinary? Exactly. Look at the güerita (blondie) sitting in the café across the road, sipping a café con leche and reading a novel. Take a snapshot. Print the picture, put it in a frame and title it ‘Privilege.’

Two little girls are offering bracelets for sale. I say No. One of the little girls doesn’t want to give up so easily. They hang around for a bit. I have put the novel down on the table. Suddenly I have a little ponytailed girl leaning on my armrest. A curious little index finger wanders to the first, yellow letter of the title. 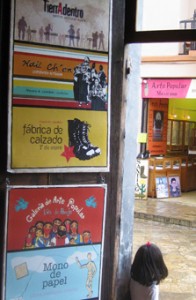 She looks me straight in the eyes and gives me the biggest smile. Something marvelous just happened. I don’t know what it is, but she does. She exchanges a few words with her little friend in an indigenous language, and the two run off.
***
La reina del cine Roma (The Queen of Cinema Rome, http://lareinadelcineroma.blogspot.com) is a novel by Alejandro Reyes. We’re meeting Alejandro in Tierra Adentro, just down the road from the café. ‘Tierra Adentro’ means something like ‘land inside’ or ‘earth within.’ In this building with a large patio several Zapatista co-operatives have shops and a café.

Let’s role-play. You’re your version of the little girl who sells bracelets in the street. Your vivacious curiosity guides your actions and attitudes and overrides your sense of duty, obedience, or etiquette. You realize that Alejandro has a very good story to tell – but you don’t know how to read it, so you have to ask questions. I’ll be your prompter, in case you get stuck.

What’s the story with La reina? It’s Alejandro’s second book, published after the short story collection Vidas da Rúa (Lives from the Street). The stories and the novel are set in Salvador de Bahia in Brazil. In La Reina, Alejandro tells stories about dignity that comes from the embrace of identity even when it’s difficult, from the tenacious commitment to love in a situation that has been created to annihilate the very possibility of dignity and love. It’s a novel on children who live in the streets and don’t have parents, or their parents abuse them or are unwilling or unable to protect them from abuse. Betinho and Maria Aparecida, Creuza and Chico, are the ‘marginal’, those who the Zapatistas call ‘those from below’ – marginalized, pushed out, stepped on because of class, race, gender identity, sexuality. Who are the ‘marginal’ and ‘those from below’? Alejandro explains both these terms in the audio of the same title.

Reyes Marginalities and Those from Below

But how and why, you may ask, did a Mexican who was born and raised in Mexico City, emigrated with his family to San Diego at age 15, got a degree in Computing and worked in Silicon Valley for five years, and then went backpacking for another five years across the Americas, to Asia, and to Europe, with a long stop-over in Paris – how and why, you may ask, did Alejandro Reyes write a novel in vernacular Brazilian Portuguese, set in Bahia, and on the marginal in a country that isn’t even his? Alejandro says that Bahia – where he arrived in 1995 – and the children in the street inspired him; that it was about the oxymoronic co-existence of violence, pain, and beauty. And there is a sensitivity for ‘other’ realities, solidarizing oneself with those who produce literature against the grain, and for experiencing the Self as Other.

Reyes La Reina del Cine Roma, Other Realities, and the Self as Other 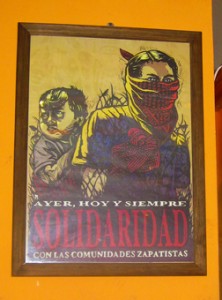 What is he talking about in the end of the audio? 2006? The Zapatistas and the way they see the world? Don’t rush. Imagine one word in purple and one in bright orange. Now delight in the colours. Don’t get ahead of yourself. We are in the early 2000s, when Alejandro returns to San Diego for an M.A. in Latin American Studies and then starts a PhD on marginal literature at Berkeley. He’s also collaborates with the Radio Zapatista collective.

In 2006, during the Zapatistas’ other campaign, he travels with a friend by motorcycle through Mexico, following the Zapatista delegation and doing radio reporting on the collectives that participated in the other campaign. But as I mentioned in our – yours and mine – preparation for this journey, other things also happened in 2006 – and the year became a watershed moment for Mexico. In the audio 2006, Alejandro talks about how these experiences shifted his attitude to literature and to the political subject.**

After 2006, Alejandro completes his PhD and moves to Mexico City in 2008. He works with the writers’ collective emerging from the ‘Basement of the Forgotten’ in Tepito in Mexico City, and edits with them the collection Netamorfosis: Cuentos de Tepito y otros barrios imarginados (I’m sorry but translation doesn’t work for this title. La neta you’re going to have to learn Mexican Spanish). He also completes a theoretical work: Vozes do Porões: A literatura periférica/marginal do Brasil, published in 2013 (http://vozesdosporoes.blogspot.mx/). He now lives in San Cristóbal, and continues to be a literary and cultural translator:

Reyes TRANSLATION, LITERATURE AGAINST THE GRAIN, AND THE POLITICIZATION OF DIFFERENCE

Let’s take a last wander around Tierra Adentro, before we leave. Apply what you’ve just learnt. Read the space otherwise. Politicize difference. Start by stopping to do what you may be used to doing: don’t block out all signifiers that don’t refer to food, drink and service, even though this is a restaurant; don’t turn out the manichaestic skeptic and conclude that resistance is impossible because even here they sell things***. Look at the murals and the posters and ask questions. As you have a look at the shops, be open to sensing in every T-shirt design, in the texture of every scarf, in the embroidery of every blouse, in the stitches of every leather bag or boot, the Zapatista effort that goes into building an alternative to the SafeSide. And when you look at the denunciations of the paramilitary attacks, you sense that those who want to keep the SafeSide the only option, respond with visceral hatred and fanatic determination.

Can I clarify all this talk about the Zapatistas? Wait until we get to our next stop. For now, put together the spatial experience of Tierra Adentro and the textual experience of La reina del Cine Roma. Listen otherwise: to the vernacular as it remakes literary language, to the oral that liberates the written word, to the silence of a language that refuses to turn violence into spectacle.

Sense the presence of the alternative that has been rendered absent?

Hear that interference? Those are the crashing and crushing steps of the SafeSide Private Security Squad, marching in to liberate you from the marginals, from those from below.

Starting to feel spooked out by what you aren’t supposed to perceive while living on the SafeSide?

Don’t withdraw inside yourself. Don’t pull out your crucifix. Don’t hide under the covers with a flashlight and your favourite Romance novel. Don’t clamber onto the pedestal of status and pronounce from underneath your critic’s hat.

Don’t shut down; intensify. This is a transcultural language of resistance. Listen otherwise. Think through your privilege. Become literate in resistances. Learn how to trace dignity and nurture it.

Now is your moment to look Alejandro in the eyes and give him your biggest smile, and to let him know that something marvellous has just happened.

* In raining season the streets turn momentarily into little rivers. This is why the white inhabitants and the mestizos had raised sidewalks to walk on. The indigenous people had to walk in the street. Rosario Castellanos wrote marvellously on this type of cultural encounter, and a collection of her short stories set in San Cristóbal have been translated into English as The City of Kings.

** Alejandro mentions San Salvador Atenco. For a video on what happened there, you could watch Romper el cerco (Breaking the Siege) by Nicolas Défossé and Mario Viveros. Or you could read the chapter ‘The State of Law’ in John Gibler’s Mexico Unconquered: Chronicles of Power and Revolt. To understand the dynamics of the other campaign, view Nicolas Défossé’s documentary ¡Viva México!

*** The term ‘manichaeistic skepticism’ was coined by Nelson Maldonado-Torres in his article ‘On the Coloniality of Being’, Cultural Studies, 21:2-3, 240-270.